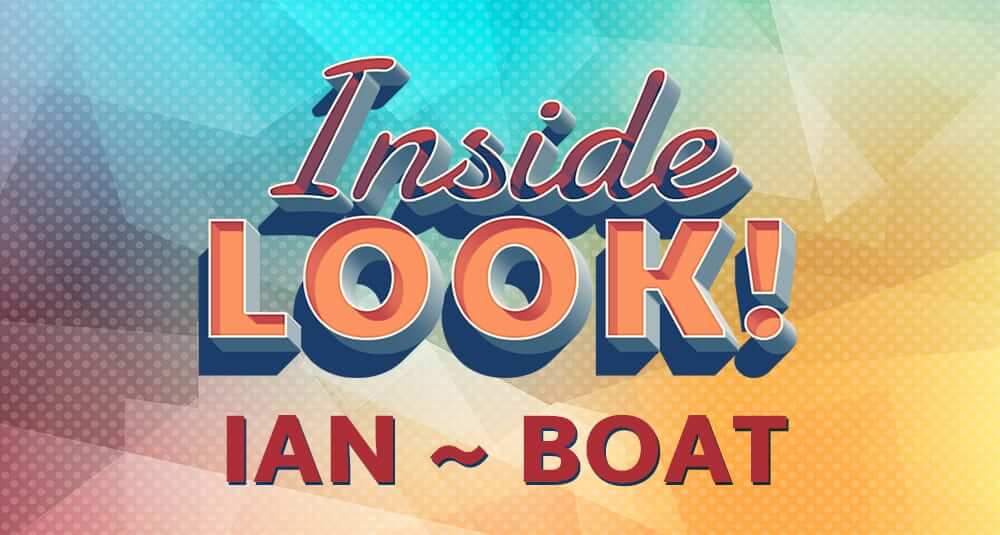 Take an inside look into the vehicle transportation process of a Boat, from Ohio! Listen to a recorded phone conversation between We Will Transport It, Inc. and Ian, a  real customer.

Customer Ian:   Good. And yourself?

WWTI:   I can’t complain.  I notice…you were on the website for We Will Transport It and I have two boats in history, I don’t remember how or where these were quoted.   Are these…shore marine?  You lifted your own?

WWTI:   I know there was two, there was a 95 in Huron and a 99, and I already have quotes built in the system.

WWTI:   Okay.  That was my next question.  It’s a hard-top boat with tarmac on there.  I know I had all the DRTs, everything in order.  Lift on, lift off…Seattle right?

Customer Ian:   If you put in the little buoy, I measured it from…if you take off the props and we take off the gear on top of the hard top, we’re 14 feet two inches, and that’s with like maybe an inch of padding.  I was just in Dana Point last week when I measured it.  I had the boat out of the water.

WWTI:   Okay.  So gear above hard top removed to lower…and what was your dimension again?

WWTI:   That’s what I have.  Okay.  So the last one I ran was the same, and you’re 14 six wide, 43 six LOA and I was 14 four high on the last one.  So…and this one is in Lake Huron, or Huron, Ohio rather.  And I’m going to give you the same numbers I had because I did the whole work out last time.

WWTI:   Twenty three 73 for mileage.  So escorts, permits, and then route survey because you’re 15 six…you’re 15 three is what I had it measure, and I came back, if I drop the bags on the triaxle, which is an RGN locally I’m 15 three, so you are a full out survey.  Two weeks, just paperwork back and forth to DOP, that’s how long it takes.  It sometimes will come back seven to eight but we’re at their beck and call no matter we want to do.  And that one came back, it was 16,987.58 just by the mileage factor.

Customer Ian:   Okay, and when we get the quote and we sign up for it there’s no changes right?  I mean it is…

WWTI:   Right.  No, this is the actual rate to move the unit.  Like I said I had all the stuff, hard numbers, and it took me maybe 15 minutes to go in and pull the five or six responses for emails, and I had a pull…I had a cruiser, just go and three months ago I had an aft cabin go and the dimensions were spot on, like we were like 33 thousand pounds.  But that doesn’t affect the rate, but just aware and knowing what our escorts are, our day rate is and the route survey and how much time, half my work’s already done.  And I know this boat was smaller, we use a 99 hundred or 95… yeah.

So I’ve already got basically everything and I even put the yacht…reference ID so that the links to be pulled up for DRT.  So pretty much I had it dialed in.  But yeah, that is the actual rate.

As far as quotes, we don’t do them only because they’re susceptible to change and diesel, so your rate confirmations that we’ve sent, they’re spot on, they’re accurate, there’s no changes.  There’s no difference and there’s certainly no time constraints because again, we’re not on our own beck and call, we’re on the DRT’s profile once we move…so.

WWTI:   My name is Bradford and I’m going to send over all the data just in one lump to you.  When are you going to move forward, I know you’ve already been out there.  Are you going to sea trial or get a survey?

Customer Ian:  Yes.  Well you know what, I haven’t been out there and I guess he was working with somebody else by the name Ian too and he was almost confused. I don’t know, I mean it’s just absolutely bizarre because I called…so here’s my answer, “I’m in a deal that I’ll find out this afternoon if it’s going to go through, and if not…if it is going through then I’ll need a quote from Dana Point, California to Seattle, Washington, same boat just different…different boat, you know what I mean, same model, same everything, and we’ll bring it out from Dana Point.  As it’s going right now the survey isn’t going to pass and I don’t think the mechanical’s going to pass from me…for me.

Customer Ian:  On the Dana Point, yeah.  But if it’s easy for you to just kind of have a quote ready for that in case it does go through.

WWTI:  I will start jiving on that right now.  This is too ironic.  So the Dana Point boat usually by the time a guy gets over to it I’ll have three or four broker requests for the same boat in history where I’ve already worked them, and I’ve got one at Dana Point but it’s not me, it was one of my dispatchers upstairs who did it. So I’ll run up there and I’ll print it out right quick.  We’ll see where it came in and I’ll just forward it to you at the same email.  I just sent you over the one for Huron, obviously we know it’s getting interest out there from buyers from God knows where.  But I sent that one and within 30 minutes you’ll have one out of Dana.

Customer Ian:   Okay perfect.  Thanks Bradford.  Okay, and is there any…like any way to get that rate down from 16 nine if we move forward?

WWTI:   So there’s a lot of different things that go into that process.  The Number One thing for us is letting you know that it’s not a four day on-the-road adventure, it turns into eight because weekends are limited travel on permits, and that’s…  And so what you have is a team, you’ve got a guy forward and a guy aft with two trucks.  You’ve got our power unit which is a cross eight rig; you’ve got our expandable RGN, our…running around.  So bill costs alone before you get out there are extreme, and companies will give you quotes, they’ll say “I can do it for 14,” or “I can do it for 12.”  And so I measured ours very very heavily before I get a guy like you on the phone and we do this day-in, day-out.  I’m located in Fort Lauderdale, we’re in boat Mecca and a lot of my stuff goes up in the…  and probably 60% of this company’s business is southern extremities up to Border, Washington.  And for good reason people are buying them cheap here.

So when I do this I look at that, is there wiggle room?  By the time I’m done with DRT, by the time I’m done with driver, and by the time I’m done figuring where our stopping or our way points are on the road and what diesel surcharge is going to be, is there some manageable fact there?  Maybe a thousand, certainly not too much more, but that’s where they fall, and they fall like that year after year and no matter how hard I try to help a guy I always wind up within a thousand bucks, usually I’m within 600.  It’s kind of a running game, I’ve hit boats on the nose, big boats, large vessels, coast to coast, and I’ve hit that $600 mark nine out of ten times…reality.

So there is…and you’ll get lower quotes from people that are just…lesser responsible or lesser educated, and we get that, and there’s countless guys that come back to us after they’ve been through the fire and their boats haven’t moved.  But if you had a number, and I sent it to you in writing, if you had a number to go back and forth maybe with a broker, a little bit on the sail itself, that would be a number and certainly they should be pretty receptive to that number, that’s about the going rate for that kind of mileage.

WWTI:    When you’re into the one 60s, the one 70s, the one 80s, you’re literally talking about eight to nine percent.  So if a guy like that split his fee with you certainly you’re splitting transport costs and it’s an easy sale.  And they know that, especially down here, I’ve got guys all the time that’ll call and say “If you can trim it 500 I’ll make the deal,” and they’re taking it out of the area, and we’ll take $500 off our end and everybody kind of meets in the middle.  You know it’s…what is it, seven percent of the gross value maybe, maybe less?

WWTI:  Sure.  So if there is a split maybe right down the middle and I came back to you at 16, is it more digestible on your pocketbook or your wallet?  Absolutely, it’s just not something…you buy something like this, surveys go well, it’s good, and if you mount them on the wrong equipment, and a guy can certainly save money by putting them on a lesser rated piece of equipment.  What you don’t have going obviously over the passes, if you don’t have good equipment, you don’t have good air ride and then you’ve got what happens in the internals is these boats are delivered spotless, all the gel coat’s perfect, there’s not even a nick in the rub rail,  it hasn’t brushed against an oak tree, one.  But a guy gets down in the engine bank and he starts to see delamination on the rear springers right where the heaviest point of a bottom is, and the reason being is cause these things bounced all the heck and back 25 hundred miles down the road and now you’re talking about 30 and $40,000 in structural repair and laying up in the hold, which is bad.  So before I tell a guy to go with the lower guy I say weigh your options.

Customer Ian:  Okay.  So then basically that package at 16 nine that’s like the jail post, it’s going to get all effed up when we get it here, I mean there’s just going to be a minor…a small detail.

WWTI:  Your guys are going to put it in the sun, they’ll put their straps on it, they’re pressure wash her down, just the hull, just the floor and hull and you get her in the water and you guys go enjoy.  That’s the way it’s supposed to be.  And you’re running in the time of year now where transport’s very very good where we go into July and August and we worry about…and we worry about hell. Right now it’s prime time the next four weeks.

WWTI:   But that is a complete rate.  I sent it to you, make sure you get it, check Trash and Spam.  I got a heck of an attachment and I’ll run you a rate on Dana Point here shortly.

WWTI:   Yup…let me know how things go and I’m available to you about 16 hours of the day in season man.